With Kenya’s August 2022 looming, Kenya’s electoral commission is battling to redeem itself, after two shambolic elections preceded by controversial procurements of technology, and a vendor that some in the commission claimed that the IEBC was “enslaved to”. Kenya’s electoral commission has completed the second round of its enhanced voter registration exercise ahead of the country’s seventh multi-party election, but, for a time, was not able to port millions of voter details onto the tablets it would be using for the poll or have full access to the country’s 2017 voter register. The reason? The commission was in the midst of transferring the use of voter tablets holding this information procured in 2017 from French company IDEMIA (formerly Safran Identity Systems) to Smartmatic, a Dutch company that had won the tender to supply and maintain the Integrated Election Management System (KIEMS), and IDEMIA allegedly declined to cooperate.

“That was Kenyan’s data they were refusing with,” a source with knowledge of the on-goings at the beleaguered commission told this reporter. According to previous reporting by The People Daily, in February, IDEMIA had refused to share Kenya’s register, claiming that the IEBC owed it a hefty sum for this access. IDEMIA’S claim is part of almost one billion shillings that the IEBC owes to some of its technology partners from the 2017 election, but the IDEMIA claim, which is yet to be fully settled, holds the most potential danger to the smooth running of Kenya’s August election.  By the time that IEBC CEO Marjan Hussein Marjan was asking for help to settle these bills, both series of the country’s enhanced voter registration had taken place. IDEMIA is seeking 139 million shillings  (1,139,852 Euro) from the commission for “Support and maintenance” of the KIEMS.  This deep into the election cycle, the denial of access meant that the IEBC wouldn’t be able to begin cleaning the register, putting in jeopardy its plans to run a smooth election. IEBC CEO Marjan Hussein Marjan now says that the IEBC and Smartmatic now have full access to Kenya’s voter register and use of the Morpho Tablets, but says that out of IDEMIA’s full claim, only 86 million shillings (705,557 Euro) is payable. The claim itself, and the fact that IDEMIA could, for a time, withhold Kenyan citizens’ data raises very serious questions about the IEBC’s contract with IDEMIA, a contract that has never been made public.

Smartmatic is set to reprogram the 46,000 tablets bought by the IEBC in the 2017 election to enable voters to verify their eligibility to vote at the polling station on August 9th. The tablets were part of a larger contract for the delivery of the integrated elections management system by IDEMIA during the 2017 election. The job at hand for IDEMIA five years ago was a complex one: they’d need to deliver a system that could register voters, identify them biometrically at their respective polling station as well as transmit results directly from the polling station. The system was designed in line with Kenyan laws stipulating those results once declared at the polling station, were official, and that those results must be transmitted electronically. Effectively, the validity of the election hinged in large part on this system. The system failed catastrophically, leading to a historic ruling reversing the election result. To the world, the IEBC projected confidence in its abilities and protested the September 1st ruling; but prior to the election, commissioners themselves had their own suspicions about the technology, its cost, and ultimately whether it would work. 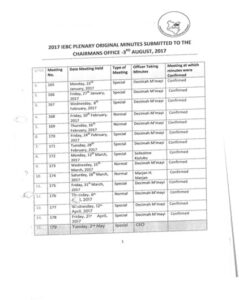 A summary document indicating some of the over 30 meeting minutes referred to in this article.

Minutes of commission meetings held between January and July 2017 obtained by Africa Uncensored, Lighthouse Reports and Le Monde indicate that at least three commissioners expressed their concerns about the cost of the 2017 KIEMS contract, which has never been made public and Kenyans know very little about. Later, there would be concerns about whether the tablets that were designed by the same company in its previous entity, Safran Identity and Security, in 2013, to collect biometric voter information and re-configured in 2017 for expanded uses at the polling station, would work properly.

The genesis of IDEMIA’s 2017 involvement in the election goes back to the 2013 election. IDEMIA (then known as Safran Identity and Security) had made it through a toughly contested tendering process, in spite of its bid having emerged as the second most attractive, behind Smartmatic. Months of lobbying by the French Embassy in Kenya would pay off, as referenced by an observer at the time, who refers to a letter written by the embassy’s economic department: “The influence of this company was seen as a key objective of the French,” this observer recalls.

Safran would successfully deliver a voter registration system which was used to register 14.3 million Kenyans. A shambolic election ensued due to late procurement and incompetence in the use of machinery that was supposed to work in tandem with Safran’s biometric voter registration kits. In that election, the French company came out unscathed, and holding the data of 14.3 million Kenyan voters. The results of the 2013 poll were disputed at the Supreme Court, and while the IEBC was largely absolved of any malfeasance, questions about the misuse of technologies meant to aid transparency were being raised inside the IEBC itself. In a series of leaked telephone conversations from 2013,  former IEBC CEO James Oswago intimated to a member of the opposition that the manner in which results were coming in from polling stations around the country indicated that there may have been interference by bad actors keen on securing a win for President Uhuru Kenyatta and his deputy, William Ruto. A former electoral commissioner, speaking on condition of anonymity, puts it more starkly: “In Kenya, whoever chooses technology wins elections”.

In 2017, the cycle of procurement, challenges in court and a late start to preparation for elections began afresh. A commissioner at the elections commission confirmed that the IEBC was left with little choice but to turn to the company that held this data and whom they had procured from before. The commission would engage in a direct procurement from Safran Identity System at a cost of US$ 39,964,421 (Kshs 3.96 billion at the time), repurchasing some items that it had already had procured years before, making it Africa’s most expensive election.

In minutes from a meeting held on the 28th of February, 2017, the commission’s secretariat, then led by Ezra Chiloba, cited road-blocks to the tender for delivery of the KIEMS system after it was challenged in court. They gave commissioners two options: The IEBC could procure directly from vendors, or lease the kits from other electoral bodies on the continent. Top of the list of vendors that were suggested was Safran Identity Systems. A passage from the same minutes carry a response that seem to indicate a division between the commission and the secretariat on the matter:

“The Secretariat had been directed to look at the option of leasing from four EMBs – Election Management Bodies –  (Ghana, Ivory Coast, Nigeria and Zambia); and conduct a comparative analysis using a matrix with identified variables, Information from the EMBs was also to be obtained so as to assist in the analysis. The information had not been obtained as directed. The Secretariat has not presented the comparative analysis as requested.”

“At a Research Technology and Strategy Committee meeting, ICT had been asked to conduct a background check on three Companies (Safran Identity Solutions, Smartmatic and Gemalto) proposed by D/ICT (Director, ICT). Information was also to be obtained from the UNDP (United Nations Development Program) as well as a Desktop research to be conducted to assist in obtaining information on the Companies to inform decision making. This had not been done comprehensively.”

Reflecting on this time, a member of the 2017 commission commented that commissioners were being “managed” into selecting Safran as the vendor the IEBC would procure directly from.

In another meeting held on the 18th of March, members of the secretariat again insisted that the only option available was to procure the KIEMS kit from Safran, given that it had developed a “stand-alone” voter registration system in 2013. They based their assessment on the risk of incompatibility between Safran’s voter registration system and other vendors’ voter identification and results transmission systems. Commissioners pushed back, again citing that the secretariat had allayed their fears about incompatibility as “software issues” earlier in the year. Later, on the 31st of March, the following was observed:” “…that despite several requests at previous meetings to conduct a market survey on prices for comparison purposes, the Secretariat had not complied, but had instead come back with different proposals at all subsequent meetings; and gone full length to procure directly from Safran…There was a view that the whole process had been stage managed and that the secretariat had not followed due process as well as not given correct information.”

At this same meeting, three commissioners expressed their discomfort with the cost of the procurement, which stood at US$ 39 million, making Kenya’s the most expensive election in Africa at the time. The commissioners cited a lack of value for money and concerns over Safran’s capacity to deliver as promised. A harbinger to the entire meeting was Chairman Wafula Chebukati’s statement expressing his fears that the commission did not have its house in order, just four months to the election.

Eventually, these fears materialized. Not only did the commission experience serious challenges in results transmission during the 2017 election, but it later emerged that Safran had subcontracted the contract for provision of results transmission software to Spanish company, Scytl.

Chris Msando, the acting Director of ICT under whom all of the technology driven aspects of the election would be managed, would be the face that the commission used to project confidence in the strength of IEBC’s technology. According to an insider at the commission, Msando would advise the commission against the deployment of a back-up data centre the IEBC had procured because it had been purchased too late, instead advising that cloud services that were also used by Safran as an alternative to a system that could fail. A few days after the system had been deployed, Msando informed the commission that the option he had recommended had been infiltrated.

“He said that there was a ‘tunnel’ created to transfer data out”. Msando would be kidnapped, tortured and murdered, his body found on the 31st of July, 2017 alongside that of 22-year old Carol Ngumbu, said to be a friend of Chris’s. The murder cast a shadow over the election and the failure by police to identify his killer has done nothing to dispel fears that it was connected to his work.

Delays in procurement…Concerns over smooth delivery of the election and a company that some IEBC commissioners complained that Kenya seemed “enslaved” to… Already heightened tension amongst the public ratcheting up by the day. Withering faith from the public in technological solutions that were meant to boost faith in Kenya’s electoral system… Each of the main sides’ every political move becoming fodder for fake news assaults supercharged by social media. To cap it all, the ever-present threat of a disputed election and violence thereafter, based on the formbook from past elections. This was Kenya in 2017. This is also Kenya in 2022.

The second paragraph of this article was edited on May 24th at 12:30PM to reflect that “IDEMIA’S claim is part of almost one billion shillings that the IEBC owes to some of its technology partners from the 2017 election

More Women Aspirants In The 2022 Election.